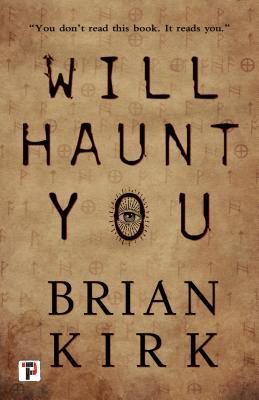 Will Haunt You by Brian Kirk

It’s the reunion of the heavy metal band The Rising Dead, and guitarist Jesse Wheeler expects to return home stone sober. Just when his attempts seem successful, an odd encounter on the road plunges him into a world of clones, feral men, and his worst enemy: booze. Is this all in his mind? Is this the punishment for his sins? Unable to trust what he sees, who he meets, Jesse struggles to keep his sanity intact.

I received this book in exchange for an honest review. I thank Flame Tree Press for giving me the opportunity.

Will Haunt You piqued my interest primarily due to all the varying opinions; it proved a book many found themselves divided upon. The general consensus seemed to be that it was overwhelmingly vague, and I can now confirm that to be true. I want to be clear, I was not part of the marketing program that preceded its release. In fact, I never read any of the stories that were published and considered a prologue. Whilst I can applaud a unique promotional strategy, such can indeed lead to a certain expectation that likely won’t be met – hype tends to be eventual disappointment. So I went in relatively blind, yet still somewhat aware of the complaints surrounding it, and all in all I didn’t regret the time spent. I actually looked forward to the bizarre scenarios that would continue to confront the protagonist, and I can honestly say that I never predicted anything that transpired.

Jesse entertained me quite a bit, and I believe Kirk really excelled at creating a distinct voice for this recovering addict. I found myself vehemently disliking him one moment, and sympathising with him the next, this back and forth present for the entirety. His lies, and his inability to own up to his mistakes struck a chord because of how tragically human it was. This is the reason I have a soft spot for first-person POV; if done well, I can feel more attuned to the character’s inner monologue. The use of prose expressed a great many emotion that plagued Jesse throughout, and also touched upon philosophical matters that resulted in my own mind racing.

I’m not put off by overly complex plotlines, as I quite enjoy the speculation that comes with them. In this case, I took pleasure in the journey with the assumption the ending would provide answers. What I should have kept in mind was the overall style of the book, and what it was trying to accomplish with the complete lack of hand-holding. Of course it wasn’t going to be tied up neatly with a bow on top, even if I hoped otherwise. I came out of the experience more mystified than ever, and for me, if I’m denied a certain closure that I feel is appropriate, then I’m left with a bitter aftertaste. Unfortunately that’s what happened here: I was not satisfied with the outcome.

The whole deal with breaking the fourth wall was something new in regards to what I’m used to. It didn’t work for me; I was brought out of the story several times, and it failed to elicit a sense of uneasiness, which I presume was its intention. I do however respect the branching out and trying new things in the genre.

In conclusion: Will Haunt You was an outlandish read, with many twists and turns that married the bizarre and the ominous. Whilst I found enjoyment in the unpredictable sequence of events that challenged Jesse’s sanity, the ending, as well as some other aspects, didn’t quite do it for me. I would have preferred some semblance of understanding when I closed the book for the last time. As it was, more and more questions were piled upon a mountain of confusion.

All around the world, there are places where people explore the reaches of depravity. Suburban houses hosting bondage parties. Blood rituals in church basements. I heard there are underground clubs in Thailand where powerful businessmen pay to kill runaways. Some people have wicked ways to get off, and we let them.

2 thoughts on “Will Haunt You by Brian Kirk”