The Gulp by Alan Baxter 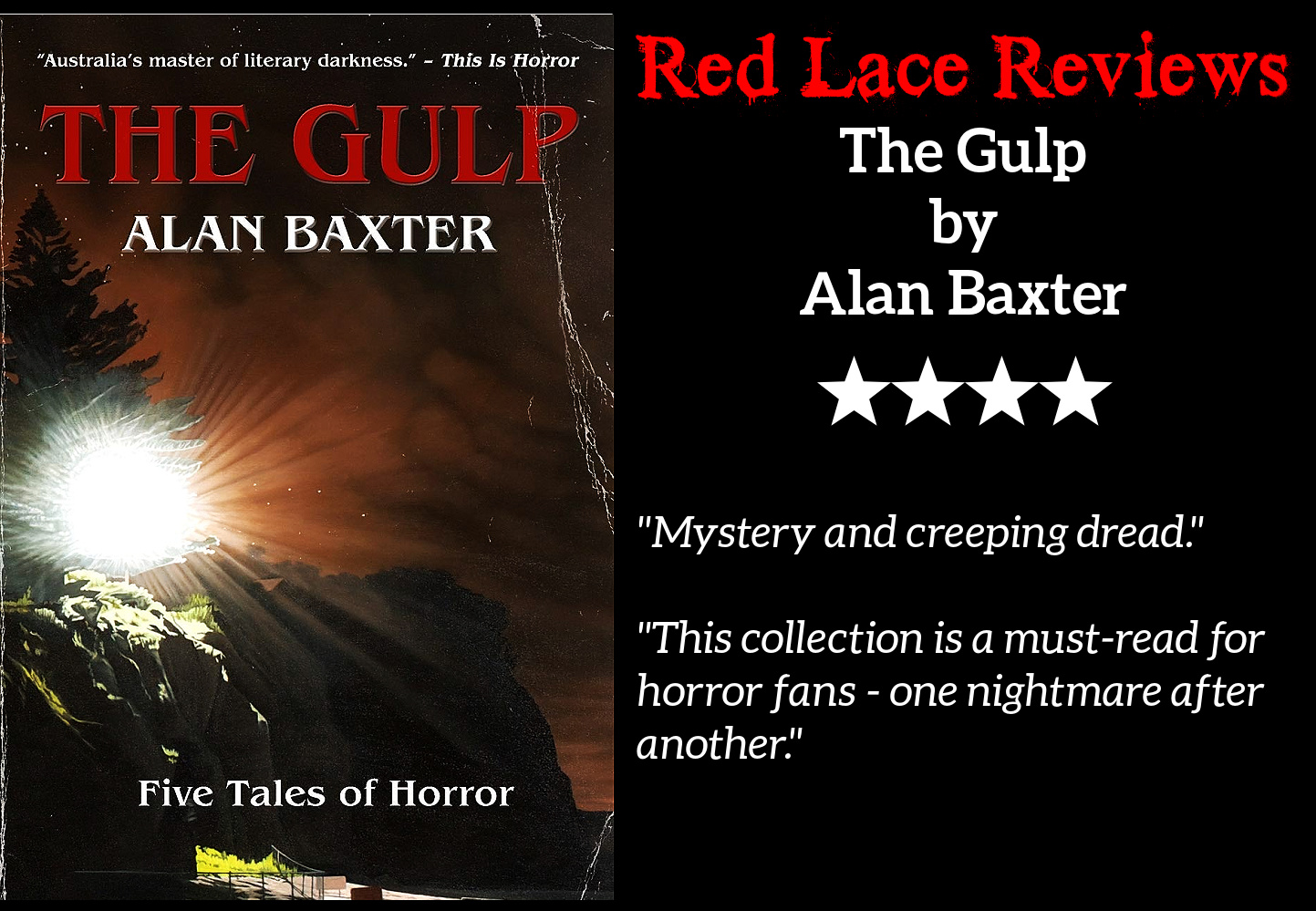 There lies a place that’s hard to find on any map, and the locals know it’s not just any old harbour town. Bizarre occurrences are the norm, from the recurring nightmares that plague its people, to the way nobody can truly escape it. The xix novellas of this collection further explore the secrets that lurk behind the closed doors of The Gulp.

With five novellas in one volume, The Gulp introduces the Australian town of Gulpepper and the strange phenomenon that affect not only its locals, but those that pass through. It’s not just the crime that’s a problem, but the horrors that run deep, Baxter excelling in building an air of mystery and creeping dread – I was sucked in, and couldn’t help but try to figure out what was happening. Being interconnected as they were, each story featured cross-over details, be it characters or venues, suggesting an overarching narrative that became more apparent by the end. That’s not to say they were all the same, each standing respectively on its own while building upon the town’s lore – for being the very first glimpse of what I assume is going to be expanded on over time, it succeeded in getting my attention. There wasn’t a single dud, but I did have my favourites.

Mother in Bloom – His mother’s voice was insistent. Desperate.
After discovering their mother has passed away in her bed, Maddy and Zack attempt to keep her death a secret and continue life as normal, but before they can properly dispose of her, her corpse goes through some unexpected changes. This one pleased the body horror fanatic in me, the situation for the siblings only getting more shocking as they tried to get a handle on it.

48 To Go – He was fast running out of time.
Dace has forty-eight hours to pay up the sixty grand he lost, so he targets a house that he believes will solve his problems, yet what he finds inside will complicate what’s supposed to be a simple robbery. Dace was a walking disaster; one of those characters that makes everything worse for themselves. It was entertaining seeing how his efforts spiraled out of control, and the secret he uncovered definitely piqued my interest.

Rock Fisher – This was his, and his alone.
Troy, a local fisherman, hauls something out of the ocean, and is unable to resist taking it home and caring for it. The most disturbing of the lot, it went to some weird places and made my skin crawl. Suffice it to say, it’s clear Troy’s actions will have some pretty significant consequences for the future of Gulpepper.

In conclusion: Best to avoid The Gulp if you can, or you may just never leave. Just kidding, of course, this collection is a must-read for horror fans, especially those that appreciate the Lovecraftian stuff. Baxter’s a solid writer, knowing how to lead the reader down a winding path of one nightmare after another, all while dropping hints of something bigger and badder on the horizon. I can’t wait to learn of the town’s fate – with Baxter’s imagination, I’m sure I’ll love it.