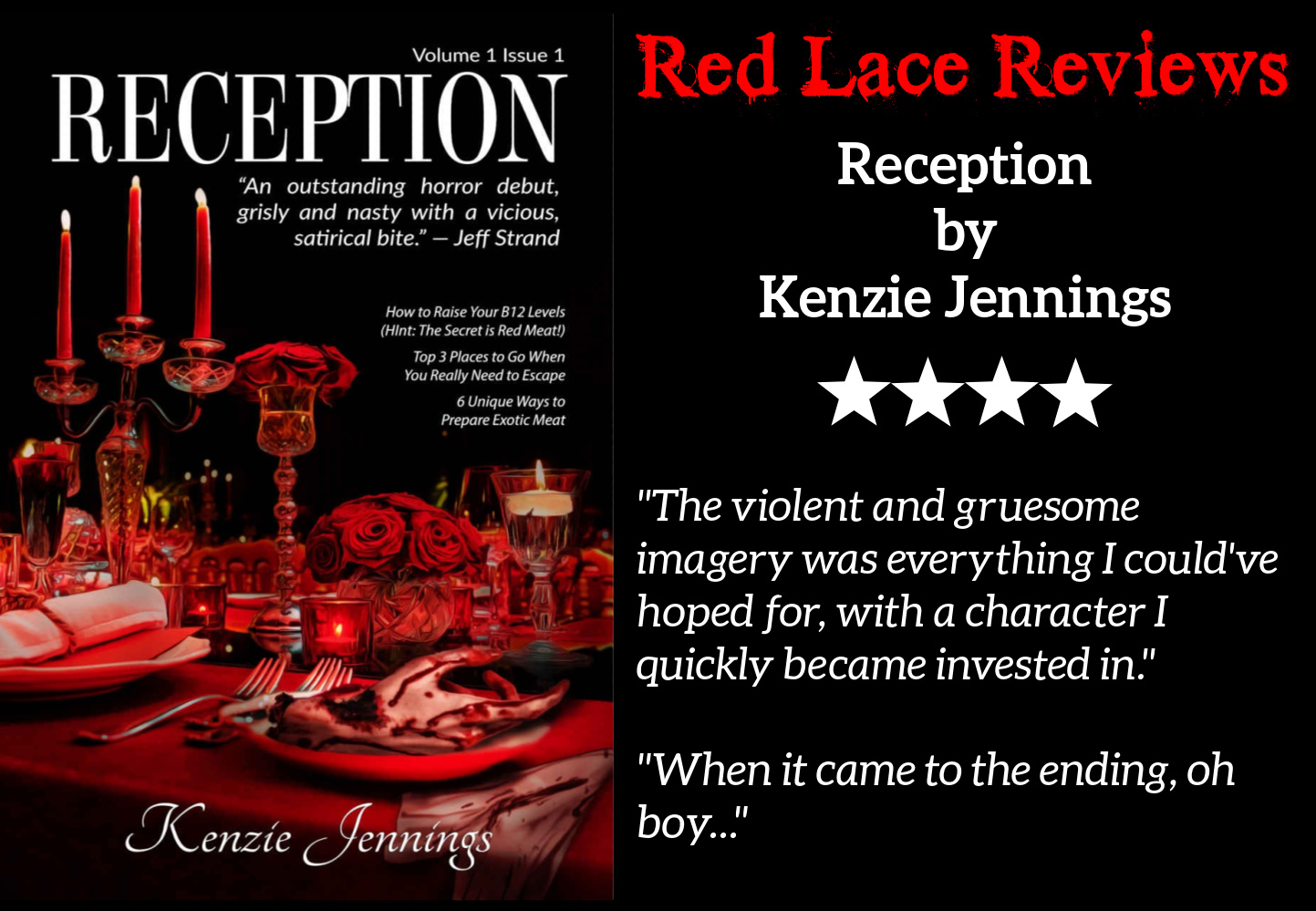 Ansley Boone reconnects with family to attend her sister’s wedding as dutiful bridesmaid, yet things seem a little odd when she reaches the venue – an isolated resort without cell reception and very little staff. Eager to get the weekend over with, events take a turn when the groom’s relatives reveal their true, flesh-eating nature.

After my mini cannibal binge of February ’21, Reception has since stuck with me, and it’ll continue to do so for the foreseeable future. Following Ansley as she temporarily takes leave of rehab to attend her sister’s wedding, it tackles some serious issues – addiction being a major one – with a satirical and outlandish flare. Despite taking a while to get going, with a hundred or so pages before the crazy really kicked off, it was worth sticking around and noting the details in Ansley’s life that seemed slightly off, and I’m not just talking about the familial conflict that comes hand in hand with such an event. Coupled with the obvious foreshadowing were hints of the direction the plot was going to take, and thinking back there was more than I originally picked up on, in that respect Jennings really excelled in executing her idea. As a protagonist I really liked Ansley and was constantly amused by her, I’d even go so far to say she was my favourite aspect of the book. So very flawed, she was the sort of female lead I generally adore, where she made mistakes and kicked butt. Her relationship with her family also incorporated an authenticity, especially the two sisters; they could be wonderful as well as terrible to each other.

The second half was pure, bloody gold, the calm swept away in favour of pure cannibalistic mayhem. The humour persisted even when the chaos was in full swing, the banter between siblings never letting up, yet it worked wonderfully with the overall tone of the book – once I got into the mindset of not taking things too seriously, even the unrealistic aspects thoroughly entertained me. All the while I wanted Ansley to survive the ordeal even though the odds were stacked against her, it was just one of those situations where the outcome didn’t look too bright.

When it came to the ending, oh boy, it was fantastic. For me, it hit me squarely in the face, and I had to take a few minutes to properly register what was happening. Probably a divisive direction to go, I can imagine some readers really not connecting with it for various reasons, but I loved it. It’s not often a book surprises me to such an extent, but Jennings did just that.

In conclusion: Reception was about a woman attempting to manage her benzo withdrawal while playing the part of bridesmaid. It was all about that morbid humour in the form of Ansley’s narrative, yet there was most definitely deeper meaning beneath the comedic take. The violent and gruesome imagery was everything I could’ve hoped for, with a character I quickly became invested in. The ending was unexpected in the best possible way – at no point did I sit back and predict THAT sort of climax.

Real grief, honest grief, consumed the soul, squeezing and then gnawing at the heart.