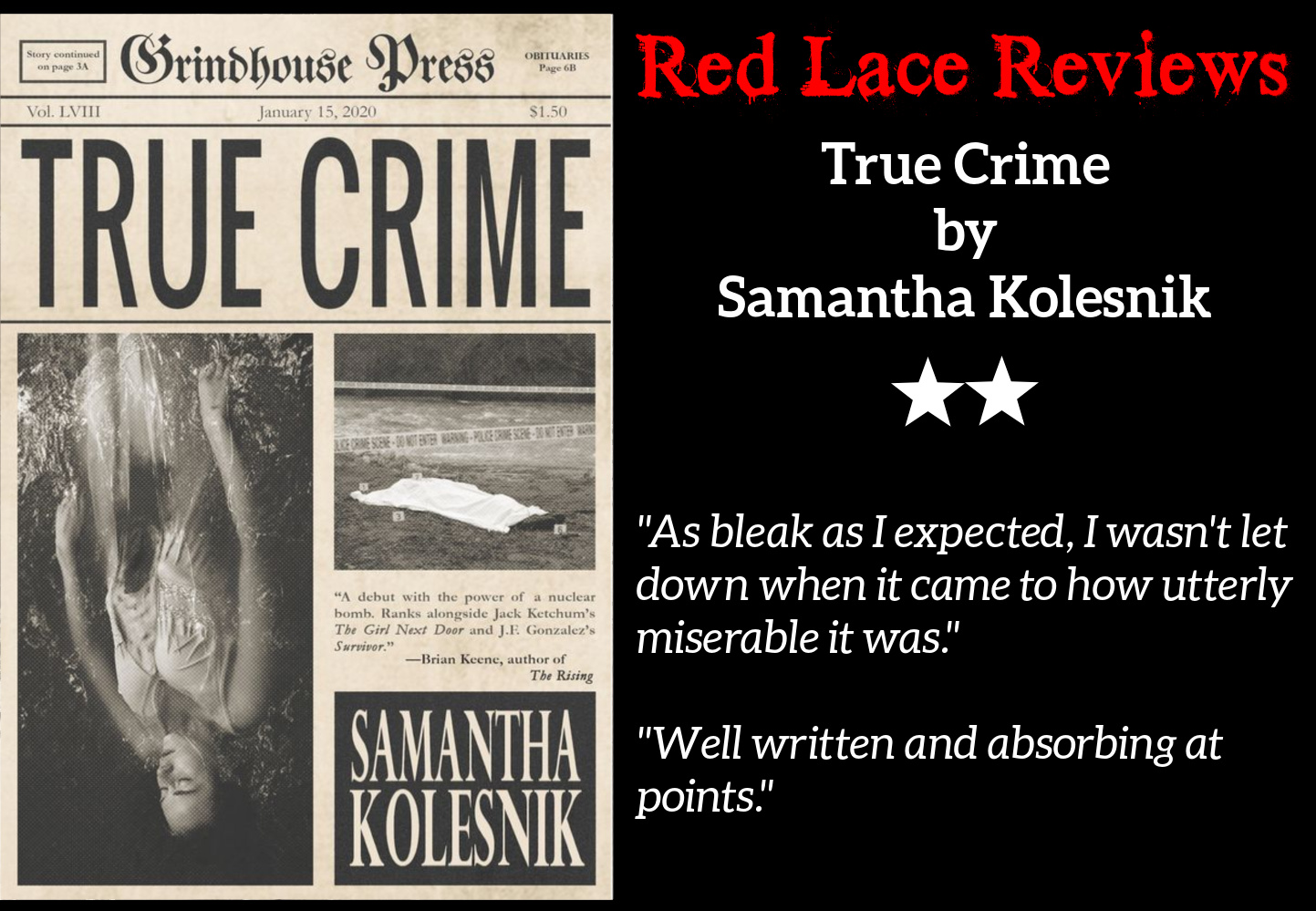 Suzy and her brother, Lim, take matters into their own hands when their abusive mother goes too far. With nothing but a car and each other, they leave behind them a trail of dead bodies, madness overtaking every aspect of their newfound freedom.

One of those books that blew up in the community for being dark and difficult to get through, True Crime was a must-read for me. It involved a pair of siblings that escaped their abusive mother, thus commencing a life of crime that went from bad to worse in the package of a novella. In the beginning I was hooked; Kolesnik illustrated that unfortunate cycle of violence breeding violence, where the damaging influence of an authority figure can have dire consequences, yet while I believed it to be well written and absorbing at points, I didn’t love it as much as I thought I would. Yes, certainly as bleak as I expected, I wasn’t let down when it came to how utterly miserable it was, add to that its refreshing female perspective, but when a plot attempts to garner some measure of empathy for the deeply troubled and murderous main character, I feel like there needs to be some facets of them to relate to. With Suzy, she was pretty far gone already, and I just couldn’t like her the slightest bit. Her love of dogs added some depth – some humanity – to her, but that was the extent of it, and I didn’t feel anything other than irritation at her melodramatic and self-centred narrative. It’s just a case of we didn’t mesh, Suzy and I, not even a love to hate relationship. As for Lim, he didn’t strike me as having much of a personality, and instead of any meaningful development between the two, he was out of the story in a flash due to a jarring time skip.

Which leads me into my next point, that being how interesting I found Suzy’s relationships to be, but the potential just didn’t reach its peak. This is where I echo an opinion of mine: some novellas would work better being more fleshed out, particularly when they span a lengthy amount of time of the protagonist’s life. There was much to explore about Suzy, but the breakneck speed made it impossible for me to truly get a sense of anything. Maybe had I liked the ending, I would’ve felt better about the entire thing – you know, a payoff that made it worth it. It’s not like I require a good outcome to feel satisfied, I’m not a happily-ever-after kind of reader, but a lot falls on those last few pages, especially if I’m having a difficult time with the book. Unfortunately, Suzy’s last scene was just underwhelming – if anything, it was easy to predict the moment the animals were introduced.

In conclusion: True Crime delved into the psychological effects of abuse and how trauma can manifest itself. It consisted of a disturbing and chaotic journey of brother and sister setting out into the wider world, murder very much on the cards. It’s one of those books that seemed to work for many readers, but I can’t say that was the case when it came to my own experience. I loathed the leading character, and what elements I liked flitted by until there were no more words to read. I also wasn’t fond of the ending, there was a significant lack of closure.

I wondered how the world made its villains and why it never apologized for making them.

← Tender is the Flesh by Agustina Bazterrica
Bodies: A Romantic Bloodbath by Moses Yuriyvich Mikheyev →