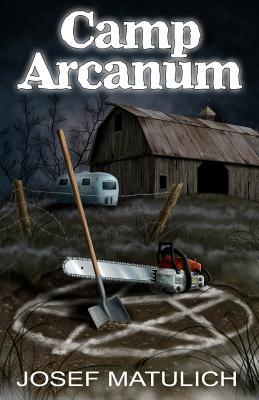 Marc Sindri and his two friends travel to Arcanum, their task to construct a renaissance faire in only seven months. With the deadline hanging over their heads, they try to work around the many distractions – from the mysterious woman who wants to hold a Wiccan celebration on their land, to the locals who seem to know their every move. Events escalate as Marc gains the attention of Jeremiah Stone, and with time closing in, conflict with the demonologist can only have severe consequences.

I received this book in exchange for an honest review. I thank Josef Matulich for giving me the opportunity.

A comedy about sex, magick, and power tools. That rather misleading label led to certain expectations; in my head, I imagined explicit sex scenes and nutty violence with said power tools, much like an old, low-budget horror movie that’s lovable in its absurdity. I couldn’t have been more wrong though, and my goodness, it was a struggle to get through this. I was aware romance would play a part, the synopsis said so, but it wasn’t clear about how much would focus on the relationship. Answer: all of it. There’s no question that this is a paranormal romance novel, complete with insta-love, the cliché argument that interrupts the lovey-dovey-mushy scenes, and the reunion to top it all off. I was once into the genre, and years ago I probably would have enjoyed this to some extent, but not today. I think it should be pretty clear that my tastes gravitate toward darker topics.

Pieces of action were few and far between – it took nearly fifty percent for something to happen. The majority focused on the budding couple, and for the life of me I couldn’t find enjoyment in their dysfunctional back and forth. Marc was the definition of a macho man; he inwardly sized up every other male he met, asking himself if he could take them in a fight. He also didn’t like to be told what to do, meeting such with aggressive behaviour. Brenwyn wasn’t better, what with keeping secrets, and together they didn’t make much sense. At times their treatment of each other was downright questionable. Obviously with a book like this, you should want the characters to come out the other side, overcome obstacles and have a happy ending. With me, I didn’t care what happened to them. They didn’t manifest like real people, and that goes for the remaining cast as well.

Despite not connecting with the book overall, I did like concept of Arcanum – a town heavily brimming with the magically inclined – and I believe it had a great deal of potential. It just wasn’t what I thought it would be, and I was terribly underwhelmed by the plot. As far as the comedy went, I didn’t find it funny. I consider myself having a sense of humour, but in this instance it felt forced to the point where I rolled my eyes at the juvenile games; they played a prank on the ‘villain’, and then were surprised he reciprocated by doing something evil. Seriously, a prank? They were fully aware of his abilities, so kicking the hornets nest screamed of a sacrifice in character intelligence for an attempt at comedic value.

In conclusion: It didn’t work for me. Camp Arcanum consisted of lighthearted banter and romance, which just wasn’t enough to appeal to my current reading tastes. I also didn’t like the characters. It’s a shame, as I love the idea of a town heavily involved in the occult, but I feel this didn’t deliver.