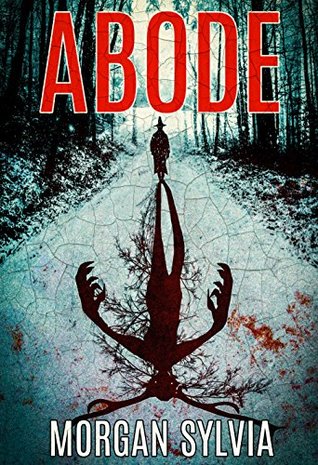 Reaching out to a stranger he believes is the reincarnation of his sister, a man retells the story of his childhood, and the unsettling events after moving to the Kent house in Maine. It was subtle at first – the creaking, the feeling of being watched – but as winter vast approached, the power of the land awoke from its slumber, and it was hungry.

I received this book in exchange for an honest review. I thank Morgan Sylvia for giving me the opportunity.

As a debut novel, Abode had its strengths that appealed to me, as well as weaknesses that proved increasingly grating the further I progressed. Firstly, the format was quite ambitious, told entirely through the form of e-mails to an unknown recipient. It was extremely easy to get into initially – I lost myself in the ramblings of the unnamed narrator, and his recount of his childhood fascinated me to an extent. It’s true; I have a certain fondness of first-person, of getting acquainted with a singular voice, but the style can have its drawbacks. I don’t consider unreliability one such hindrance, as it can be used as a tool to add to the unfolding story, but as it was, the repetition spoiled my enjoyment. It worked until it didn’t. I understand he wasn’t mentally stable, and it’s quite clear his thoughts were all over the place, but relaying the same information over and over does nothing but pad out a shorter book. I believe, if without the unnecessary filler, it would have been a much more satisfactory experience.

The aforementioned filler relates a lot to the last eighty percent in particular; after the history lesson, it lost much of its charm, and by that point I just wanted it to hurry up and end. I began to dislike the beating around the bush, and the dwindling sanity of the narrator, because it dragged on too long. My interest primarily lay in the past, where the destruction of the family dynamic was the focal point. We were promised a significant death early on, and after it was delivered, I didn’t much see the point of sticking around. To me, the story ended there and only suffered from getting the word count up.

The horror aspects – the haunting and the creature in the woods – were surprisingly decent. I say this because ghosts generally don’t unnerve me as much as I’d like them to – their presence tend to include the typical shtick of loud noises and moving objects. Sylvia entwined more than one supernatural element however, and that mix really projected a sense of disquiet. The entity that was Jeremiah was the highlight; a being that extended past the confines of time. A Lovecraftian vibe was evident due to the magnitude of his influence, and the vulnerability he inflicted on the psyche. I do have to wonder, as I often do when it comes to haunted houses, why they remained living there. I guess it’s just another complaint I have about the trope.

Another thing I liked was the lack of confirmation in the end – it’s left unknown as to whether the woman was actually the reincarnation of Lexi. Favouring the bleaker side of things, I prefer to think that she was not, and that she was just being stalked by a very traumatised mind.

In conclusion: A unique way of storytelling, yet it eventually became too tedious and drawn-out. If it was a mere ghost story, I would have felt less engrossed, but the monster really piqued my interest. Jeremiah, in his fabulous hat, made it worth my while.

Truth, they say, is. It brings down evil men, and avenges the victims of their crimes. But that isn’t always the case. Sometimes truth is a hideous, terrible thing, that slithers through the shadows that lurk in men’s hearts. And truth cloaked and veiled in legend can be a terrible thing.

4 Comments on “Abode by Morgan Sylvia”