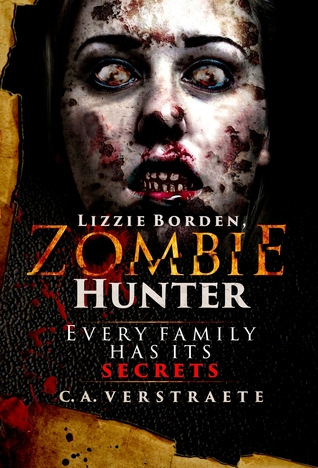 Lizzie Borden is in trouble – after killing her father and stepmother, she faces the scrutiny of officials, but what the law and the masses hurling insults outside her home don’t know, is that she had to defend herself from them. They were no longer living flesh, but were mindless and intent on causing harm. Determined to protect her sister and help with the threat to society, Lizzie accepts the consequences of her actions. She just hopes the noose doesn’t get to her first, before she can solve the mystery surrounding her family.

I received this book in exchange for an honest review. I thank C.A. Verstraete for giving me the opportunity.

What struck me first and foremost was the creative concept – we all have heard of dear ol’ Lizzie Borden, right? ❝Lizzie Borden took an axe, And gave her mother forty whacks, When she saw what she had done, She gave her father forty-one!❞ Implementing zombies into the mix promised entertainment of the undead variety, and that’s indeed what Verstraete succeeded in doing. Whilst staying true to historic events as much as possible, a mystery involving Lizzie’s deceased father brought with it an air of intrigue. There were secret societies, many battles, and a nefarious plot with all the trimmings. The writing was also quite decent as well, if not for the over-use of certain words when describing the zombies (though I imagine there’s only so many ways to describe a rotting corpse).

I did have some other issues that I’ll get into. The “romance” aspects didn’t make much sense to me; they added nothing other than a thirty-something year old woman pining over men like a teenager. I wouldn’t even consider it romance per se – there was very little development and chemistry between characters. It merely consisted of Lizzie swooning over how handsome they (yes, more than one) were. The saturation of romance in fiction bothers me a great deal, because it’s not needed to make, or improve, a story. Friendship can be equally heartwarming, and definitely a better option than a shoehorned relationship that brings nothing to the table. I also believe that, taking into account Lizzie’s monologue about being a spinster and proud of it, she was awfully hypocritical. Lizzie’s motivations certainly weren’t clear, and I would have preferred more depth, and less of the bizarre man-lusting.

There’s also the fact that weapons seemed to materialise out of thin air, just when they were needed. Hatchets, pipes, and whatever else were conveniently in place to save the day multiple times. It’s these little bits and pieces that were glossed over; suspension of disbelief relied upon. There were glaring flaws I found in the plot, as well. Lizzie immediately acted guilty of murder – hiding and destroying evidence – when she could have easily admitted to self defence. I understood the desire to stay close to the documented, real life happenings, but more thought could have gone into the execution.

As fun as I think the book was when it comes down to it, it held many holes that stood out to my critical mind. The biggest strength was the ending, which was grim in a way I thoroughly enjoyed. It was a nice surprise indeed.

In conclusion: Action-packed and full of decay, this instalment as the first of a duology had promise. It served well for a bit of pleasant amusement, but as soon as I started thinking about it too much, certain elements – like the lack of character building – got to me.

Her father’s face, never handsome yet commanding just the same, resembled an image from one of her childhood nightmares.