The Haunting of Hope House by Astrid Addams 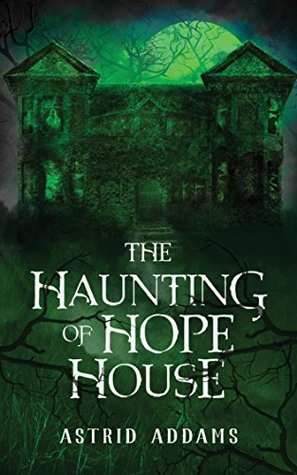 After losing her husband, Alice Stone is shocked to learn about her inheritance of Hope House; a place she never even knew existed. Eager to escape past mistakes, she makes the journey with her two children and brother, out into the middle of nowhere, hoping to find safety and solace.

I received this book in exchange for an honest review. I thank Astrid Addams for giving me the opportunity.

I’ll always give independently published novels a chance, even if, stemming from past experience, I tend to regard the majority of them as unfinished works. Perhaps it’s an unfair way of thinking, but I can’t for the life of me endorse unedited / uncorrected books going on sale for any amount of money. This was a prime example that read more like a draft than a complete and polished product, and honestly it’s a shame. It had certain potential that reared its head now and again, but was ultimately pushed down further into the depths by an over abundance of grammatical errors and poor storytelling. Not only that, but there were instances a character was called by an entirely different name than their original, and that, as you can imagine, confused me a great deal. Surely the more noticeable mistakes would have been detected upon revision, but sadly that wasn’t the case.

The haunted house trope has been done time and time again, so by now it would take a lot to set a book apart from the ocean of others. Ghosts, in general, are probably my least favourite horror foe, simply for the fact that very little is new – loud noises, faces in the darkness, furniture moving. It needs to have an extra punch – something more – for me to fully appreciate it. It was clear that Addams tried to implement a few extra plot devices into the mix, and that’s where the aforementioned potential primarily lay. With Agatha, it was the attempt at creating a mystery surrounding her origins, and with Madison, it was her uncanny ability to sense emotion. The former was handled quite clumsily; Agatha’s identity was excruciatingly obvious from early on. As for the latter, Madison’s supernatural power was left largely unclear.

Some of the writing decisions also didn’t appeal to me, such as the odd impression of sexual tension between Alice and Gary. They would, at times, appreciate each other in terms of their attractiveness, and whilst I don’t think it was intended to be perceived that way, I couldn’t help but get that incestuous vibe. Then again, I don’t have siblings, so who am I to know the ordinary behaviour between brother and sister?

I realise the negativity, however the one thing I did find intriguing was that the house itself was split into two parts. It got my attention; I wanted to know more of what was locked on the other side. I just wish that aspect was explored a bit more.

In conclusion: I amended my rating to properly reflect my overall thoughts. I don’t like leaving reviews such as this one, but I’m simply staying true to my opinions. I just don’t consider this title finished; it could use a lot of work.

2 Comments on “The Haunting of Hope House by Astrid Addams”