Runtime: 90 minutes
Year: 2017
Starring: Aaron Poole, Kenneth Welsh, Daniel Fathers
Found: Shudder
Director: Jeremy Gillespie, Steven Kostanski
Synopsis: When creepy cultists surround a hospital one night, a cop tries his best to escape. But after one of the nurses transforms into a tentacled monster, Daniel realises something truly evil is happening here- but how to stop it isn’t quite clear…yet.

The Void originated as a crowd-funded project, and takes pride in being largely inspired by John Carpenter. Honestly, it was the cover that initially captured my attention, as anything Lovecraft-esque gets an immediate tick from me. 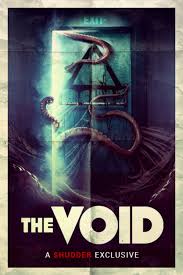 I was pleasantly surprised in the beginning, as let’s face it, there’s always the possibility of being saddled with poor acting, a monotonous plot and all-round disappointment, but from early on I was pulled into the mysterious happenings of Marsh County Memorial Hospital. The portrayal of Daniel and his fellow unlucky citizens felt genuine enough for me to become absorbed in their unfolding nightmare, even if some characters in particular struck me as slightly irritating. There were moments of black humour that didn’t take away from the atmospheric tension, and all in all, I thoroughly enjoyed the effort that was clearly put into it. With nods to the classics, it proved itself to be incredibly entertaining; I mean, how could a blend of cosmic and body horror not be glorious?

I’ll admit, I’m so very sick of the typical horror flicks that rely solely upon jump scares. In fact, I hate it, so much so that I intentionally avoid most. Even the over-use of CGI gets to me – what happened to the nitty-gritty application of practical effects? The Void, despite its low budget, used everything it could to its advantage. The creatures were deliciously messy in the way only the 80’s could achieve, and, if you ask me, it’s an art-form that’s been largely forgotten.

Whilst offering little answers to the overall plot, I still found it enough to appease my curiosity by piecing together the snippets offered. There certainly were obscure explanations, even if they didn’t go into a great amount of detail. That vagueness only enhanced my imagination, and I consider that a good aspect – I don’t want everything spelled out for me, as usually my own speculation thrills me more than any clear-cut conclusions that can come in the film itself.

The ending crossed over into the otherworldly territory of science fiction, and I was completely captivated by the spectacle that tied it all off. It was teased throughout – that stormy realm, and the structure that loomed ominously in the air. I had a smile fixed on my face at that point.

As the credits rolled, I was able to feel satisfied with my time spent, and that’s rare when it comes to anything involving the TV. If you haven’t already guessed, I highly recommend this one. It brings a lot to a genre that doesn’t shine quite as much as it used to.

4 Comments on “The Void (Shudder Exclusive)”