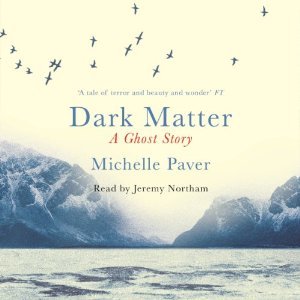 Five men and eight huskies make their way to the Arctic, specifically to Gruhuken; an uninhabited bay that the expedition will spend the next twelve months. As the last days of summer fade, darkness descends until the sun becomes a distant memory. Jack, eager to work, finds himself alone when his companions are forced to leave, one by one. Soon enough, the nightmarish ambience takes its toll, especially when a horrific figure makes itself known.

There’s a funny story related to this book, and it all started with me initially purchasing it in my local secondhand bookstore. To tell the truth, I didn’t much pay attention to it, other than noting it was a ghost story, as said on its cover. I put it away with my mountains of other titles, and then some time passed. I got the urge to try Audible again, so I logged into my old account and found a random horror to try. Much to my surprise, it was truly amazing, and it surpassed my every expectation. After I finished it, I desperately wanted to get a physical copy, but I actually already had a hardback stashed away; indeed, the book I previously acquired in the store. Realising I had already had it, without even realising it, brought a sense of happiness I rarely feel; where everything feels just right. Paver’s hauntingly beautiful story will therefore always remain special to me.

I can only try and properly express my thoughts, but I’m unsure if they’ll do the masterpiece any justice. You see, in no way did I predict the emotion that rose to the surface as I progressed through the chapters. I didn’t foresee the ending that brought me to tears, nor the fondness that stuck with me thereafter. It’s tales like these that make reading an incredible experience – something that gives the days a sense of wonder. Okay, I could probably keep on gushing, or I could actually go into the all important details.

The structure in which Paver relied heavily upon is my preferred way of storytelling – deeply atmospheric, where the surroundings are used to add ample weight to the situation. I really could see every detail in my mind’s eye, and my imagination appreciated the brutality included. Let’s face it, the Arctic is just not a place for humanity, as literally everything about it can cause a big dose of death. Paver delved further into the uninhabitable environment by exploring the detrimental effects on mental health. Isolation played a major role, smothering the main character in all its depressive glory. Friendship and love were also prominent themes, and all together a remarkable concoction was created.

I honestly didn’t like Jack at first. His dog-hating ways were the total opposite of endearing, yet as time passed, I found myself warming to him. He developed a great deal, becoming someone I very much wanted to persevere. Due to bearing witness to his innermost thoughts, he was shaped into a very genuine person – he had his fears, desires, and most of all, an abundance of confusion that had him question his identity. I enjoyed his self discovery, as did I enjoy his struggle for survival.

The paranormal aspect was subtle, but it only made it all the more oppressive; its presence was constantly imminent, and I felt a considerable amount of dread. More than anything else, I was more worried for the dogs than any of their human counterparts. I knew from the first moment of their introduction that they would be used to pull the heartstrings. I mean, it’s not like Paver would have shied away from including animal cruelty, as there’s other instances where it’s present. Isaak in particular completely gained my love, for obvious reasons.

Since I listened to Audible’s version, I have to give credit to Jeremy Northam. His performance was brilliant; adding in just the right amount of despair.

In conclusion: What else can I say, other than I one hundred percent loved it?