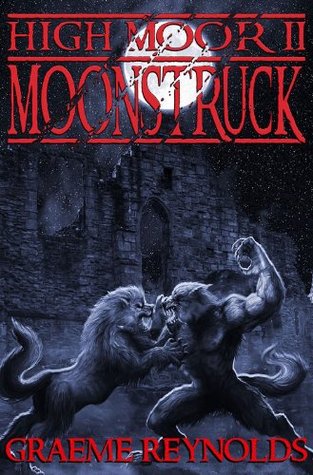 Now in police custody, John Simpson is quickly running out of options. His face is all over the news for the grisly murders of multiple people, and the full moon is vast approaching yet again. If that wasn’t bad enough, a squad of professional killers have been sent to take him out. He’s a threat, an apparent moonstruck, with no control over his monster – or so the pack believes. John’s not the only one in danger however; those that know too much must be silenced, including the law enforcement involved with the High Moor investigation.

High Moor was my one and only five star book of 2014, with very good reason. It surpassed my expectations and instantly plunged me into an exciting roller-coaster of claws and teeth. Everybody was fair game, every limb at risk of being ripped off – the extreme brutality throughout shocked me as well as thrilled me, but it wasn’t just about violence and gore. It was about a man with a terrible beast lurking beneath the surface, and a society determined to remain hidden. This second instalment was no different in terms of pace and edge-of-your-seat excitement. I found myself drawn into the life and death situations of characters old and new, and a few I truly liked from the get-go. There’s something about how Reynolds spins a tale, and that coupled with my love for werewolves, is the perfect combination.

The plot largely centred upon the werewolf pack, led by Michael as alpha, and their attempts to cover up the rather messy events that transpired in the previous book. Getting a more in-depth look at their inner workings and at their harsh, yet understandable, methods of taking care of the situation was thoroughly engrossing. Of course they went to great lengths to secure the secrecy of their race; realistically, we (humanity), would outright eradicate them upon the discovery of their existence. Perhaps not at first, but eventually. No matter how much it may be denied, we are a destructive force, and peace would most assuredly be merely an illusion. Because of this, I didn’t dislike Oskar and his team for doing what they did out of necessity, but Connie was another matter. She was the heartless villain that enjoyed the cruelty and pain of her victims. She was so consumed by hate. I have to admit, she provided some very tense scenes, like the one with Olivia, which I couldn’t read fast enough; I needed to know if the poor woman survived.

John and Marie both returned and their romance took a step further, albeit with an awkward, yet sweet moment. I appreciated that amongst the horrific bloodshed, there was at least a little bloom of love and the potential for quite the power couple. Steven Wilkinson also proved to be deadlier than ever, yet no longer did he desire an allegiance with John, but four unsuspecting policemen. I was quite fond of Phil Fletcher in particular, the older and higher ranked copper, as he seemed the decent sort. Hopefully he reappears in the final book of the trilogy, perhaps as a hunter himself. Considering the ending, there’s no doubt things are going to escalate for every character.

Another aspect I favoured was when Marie admitted to there being other types of supernatural creatures; vampires included. This made me smile and wonder of the possibility of more novels being set within the world of High Moor. I’d definitely read them!

In conclusion: Utmost excitement – excellent werewolf savagery. I’ll be keeping an eye on Reynolds’ future works, as I just love how he spins a tale.

If anything, the experience was worse going from wolf to human than it had been from man to beast. The savage fangs pushed their way back through his gums, feeling as if a dentist was drilling all of his teeth at once, without the benefit of anaesthetic. Black talons forced their way under his already forming fingernails, while every bone in his body splintered and reformed, flowing like liquid to their original shape. The worst thing, however, was the itching burn across every inch of his skin, as thousands of coarse black hairs pushed their way into his flesh. He cried out in agony, but his vocal chords were half way between human and werewolf, so all that escaped his lips was a strange combination of howl and scream.