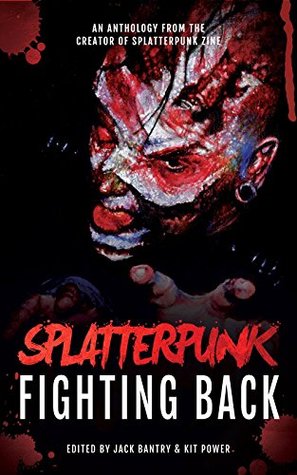 The definition of “splatterpunk” should give an idea of what this volume entails: characterised by the explicit description of horrific, violent, or pornographic scenes. With an abundance of monsters, gore, and sexual tones, it stays true to the nature of the sub-genre. My advice? Just be prepared.

I never would’ve known about this anthology had I not joined the one and only Horror Aficionados on Goodreads, and took part in their January group read with author invite. Being new to the horror sub-genre of splatterpunk, I expected that it would probably involve some disgusting and gruesome “what the hell did I just read?” moments, and I quickly discovered that I was correct. I enjoyed some stories more than others, however as a whole I consider it a great piece of horrifically violent and graphic literature.

Listed below are each individual tale, starting with my most favourite. I also thank the authors for being so pleasant to talk with, and for donating all proceeds of sale to charity.

* * *Hellscape by Rich Hawkins* * *
Even this quick glimpse into this forsaken world left me completely engrossed. A twisted, bloody apocalypse? My cup of tea any day of the week. The Cthulhu-theme fascinated me, as I’ve actually never read any such thing before (I know, shame on me). Even though it was short, and seemed to drop the reader right in the middle, I was immediately pulled into the maternal desperation of the protagonist, as well as that drive of trying to keep the madness at bay. I loved every gruesome detail and the sheer brutality.

* *Feast of Consequences by WD Gagliani & Dave Benton* *
Victims fighting back – it’s a particular favourite of mine. This one actually began as rather typical, reminding me of the whole Texas Chain Saw Massacre trope, yet it turns into something else entirely. The inclusion of the “Sasquatch” type monsters made my skin crawl, as I suspected the family had a rather… intimate relationship with them. Definitely images I didn’t need in my head.

A: Bill and I would really like to see Killer Lake finished this year. Unfortunately we both have numerous personal projects and, seeing as the work isn’t under contract and we have no deadlines to meet, it frequently gets pushed off the burner.

The novel is already plotted, it’s just missing some key scenes. Killer Lake is, more or less, an homage to horror in fiction and film particularly from the 70s through the 90s. I’m sure readers will notice us tipping our hats to Richard Laymon, Ed Lee, Jack Ketchum, as well as Stephen King. And also to films like the Texas Chainsaw Massacre and the Friday the 13th series. We’ve blended as many common tropes into the work (hopefully seamlessly) as we could without letting it go completely off the rails. Think: Cabin in the Woods, but nothing like Cabin in the Woods. I can tell you that the section you see in Splatterpunk Fighting Back, Feast of Consequences, gives away almost nothing of the book’s content. In fact, this section is a coda taken from the very end of the novel because when I was outlining the plot I forgot about Anna! Oops, almost lost a character!

Q: Considering the family itself got owned by Anna, just what ties did they have with the yeti-like beasts? I have a feeling it was more than merely feeding them!

A: As for the hillbillies and the Sasquatch… I’d say there’s definitely been some inbreeding going on there. And just some breeding as well!

*Extinction Therapy by Bracken MacLeod*
This one made me think a lot, admittedly a bit more in comparison to the others. There’s a belief that we all have it inside ourselves – an animal, primitive, left over from our ancestors. What if that gets tapped into? Even good people can do bad things, and we all have unwanted thoughts that seep to the forefront sometimes. I found Spencer’s journey to be fascinating, and I couldn’t help but want a full-length novel.

A: I think the answer is the Roanoake Colony disappearance. I know that there are not-so-sinister theories about what happened, but there’s something about an entire colony of people simply vanishing that really captures my imagination. I’d like to write about something like it, but historical fiction isn’t really my thing (yet), so I haven’t.

Q: I could speculate about Spencer all day, especially after this statement from you: “conceptual parallel running between the Sacred Ridge ethnocide and Spencer’s own life.” Care to elaborate a little, or do you intentionally want to keep people guessing?

A: I do want there to be a little mystery left here, but I will say that Spencer’s story relies heavily on elevation. [He is a being of high stature, but to meet his emotional needs, he needs to come down low and take from people who live beneath him. If he’s not a literal one, he’s a cannibal of a kind.

Darla’s Problem by Kristopher Rufty
A classic, isn’t it? The monster in the closet, or beneath the bed. I really liked this one and, sure enough, the monster creeped me out! It made me think about how we so readily dismiss children when they speak of monsters or other such creatures that don’t fit into our notion of reality – no wonder it’s been the plot of so many books and movies. Also, poor Darla.

They Swim by Night by Adam Millard
If it’s one thing I love, it’s mythical creatures, especially when an author involves their own personal twist. Ana was portrayed with such raw sexuality, and I loved the hold she had over the men in her midst. This one in particular sparked my imagination; I couldn’t help but ponder over Ana’s origins. She struck me as an apex predator, but also something more. Ancient. Malevolent. Like at one point in time her kind were respected and feared, yet they faded away into nothing but stories and superstition.

The Passion of the Robertsons by Duncan Ralston
Well, this one certainly took religion to the extreme, and delved into the sheer insanity of two individuals. Being an atheist myself, I wouldn’t want to get on the Robertson’s bad side. Really, I think the couple would’ve been better suited to the good ol’ days of when atrocities in the name of religion were the norm. Whilst I enjoyed it for what it was, it lacked in something to really make an impact. The ending was good, though!

A: Can’t it be both? But seriously, I like to think they believed they were doing God’s work. Onward Christian Soldiers, and all that.

Q: How’d the idea for this story get into your head? (Is Christmas your favourite time of year?)

A: As for where the idea came from, I just thought it’d be interesting (and bloody) from an atheist’s perspective to experience “the Passion” firsthand (so to speak). And no, I’m not a huge fan of Christmas. More of a Halloween kind of guy. I’ve got an Easter story in my most recent collection. Hoping to write one for each of the holidays at some point, if I can come up with enough interesting ideas.

Limb Memory by Tim Curran
To think if we lose a part of ourselves, a piece of our soul goes with it. Despite the added humour to the otherwise eerie tone of this one, I didn’t favour it as much as the majority of other readers. Disembodied limbs generally don’t interest me all that much.

Molly by Glenn Rolfe
My partner has pediophobia and while I often tease and laugh, I admit that there’s something unsettling about dolls. It’s the uncanny valley, right? I was left with a lot of questions regarding Molly, and I would’ve liked a bit more information for the events that transpired to make sense. She was able to clean up after her own murders? I felt like there was perhaps too much telling and not enough showing.

-Q&A with Glenn Rolfe-
Q: You’ve stated that Anne Marie was based off an actual person that temporarily had a doll named Molly. Do you know why she had it in the first place?

[Q: You’ve stated that Anne Marie was based off an actual person that temporarily had a doll named Molly. Do you know why she had it in the first place?A: To tell you the truth, I have no idea why she had that doll. I think she thought it was funny. Justin did convince her to let us put her in my manager’s office one night. He came in in the morning to find Molly sitting in his chair. Justin probably knows the whole story behind the doll. I’d have to ask him.

Q: Care to share your phobias and fears? And have you ever written about what you fear the most? (For example, has it been the plot of a horror story?)

A: As for writing my biggest fears? I haven’t tackled them in a novel yet. I’ve touched on them in some of my short stories. Anything happening to my kids is my biggest fear. Outside of that, I don’t like spiders, creepy dolls, or anything to do with nuclear war.
Obviously, “Molly” covers one of those, I wrote a short alien abduction story a couple years ago called, “Hollowed”, where the kids were the ones taken.
I have plenty of other fears. That’s what makes writing horror natural for me.

Melvin by Matt Shaw
I admit, this one made me laugh, but there was a tinge of discomfort below the absurdity. The detail was disturbing – such as Claudia’s skin darkening from her insides being torn apart. It makes me shift in my seat when I think about it even now. The ending? Well, it was a great ending. However, despite my brief flare of enjoyment, I can’t say I favoured it highly.

Only Angels Know by George Daniel Lea
I get the impression this was supposed to be intentionally hard to follow – as it was a piece written by the character himself, of whom was a very intense and unstable individual. I had to read it twice, and still I’m not sure exactly what happened. I know he had a procedure done to himself, but it doesn’t give details, and I’m left wondering if that’s the whole point. Whatever we come up with in our minds might be bad enough, if not worse than what George Daniel Lea intended. Was he getting parts of himself surgically removed? Getting parts of other people stitched onto him? Maybe I just missed it completely, and it’s lost within his jumbled rambling!

The Going Rate by John Boden
Honestly, this one was just too short for me to get a real feel of anything. I liked the idea, of a neighbourhood having to give their pound of flesh to appease the demon, but I was left with too many questions. Like a flash, it was just over, offering what I felt like very little. I would’ve loved this had it been longer.

In conclusion – There’s something here for everyone, but be aware of the pushing of limits. It’s not pretty!

← Morium by S.J. Hermann
A Head Full of Ghosts by Paul Tremblay →

5 Comments on “Splatterpunk Fighting Back Anthology”